How to Make a Simple Application with Akka Cluster

If you read my previous story about Scalachain, you probably noticed that it is far from being a distributed system. It lacks all the features to properly work with other nodes. Add to it that a blockchain composed by a single node is useless. For this reason I decided it is time to work on the issue.

Since Scalachain is powered by Akka, why not take the chance to play a bit with Akka Cluster? I created a simple project to tinker a bit with Akka Cluster, and in this story I'm going to share my learnings. We are going to create a cluster of three nodes, using Cluster Aware Routers to balance the load among them. Everything will run in a Docker container, and we will use docker-compose for an easy deployment. Ok, Let's roll! :)

Akka Cluster provides a great support to the creation of distributed applications. The best use case is when you have a node that you want to replicate N times in a distributed environment. This means that all the N nodes are peers running the same code. Akka Cluster gives you out-of-the-box the discovery of members in the same cluster. Using Cluster Aware Routers it is possible to balance the messages between actors in different nodes. It is also possible to choose the balancing policy, making load-balancing a piece of cake!

Actually you can chose between two types of routers:

Group Router - The actors to send the messages to - called routees - are specified using their actor path. The routers share the routees created in the cluster. We will use a Group Router in this example. 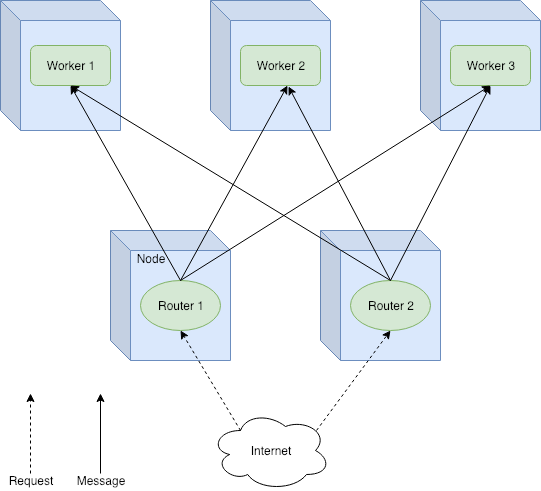 Pool Router - The routees are created and deployed by the router, so they are its children in the actor hierarchy. Routees are not shared between routers. This is ideal for a master-slave scenario, where each router is the master and its routees the slaves. 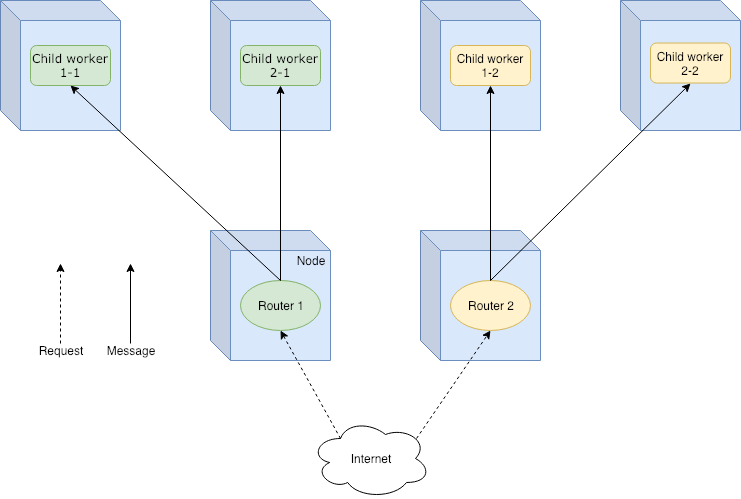 This is just the tip of the iceberg, so I invite you to read the official documentation for more insights.

A Cluster for mathematical computations

Let's picture a use-case scenario. Suppose to design a system to execute mathematical computations on request. The system is deployed online, so it needs a REST API to receive the computation requests. An internal processor handles these requests, executing the computation and returning the result.

Right now the processor can only compute the Fibonacci number. We decide to use a cluster of nodes to distribute the load among the nodes and improve performance. Akka Cluster will handle cluster dynamics and load-balancing between nodes. Ok, sounds good!

First things first: we need to define our actor hierarchy. The system can be divided in three functional parts: the business logic, the cluster management, and the node itself. There is also the server but it is not an actor, and we will work on that later.

The application should do mathematical computations. We can define a simple Processor actor to manage all the computational tasks. Every computation that we support can be implemented in a specific actor, that will be a child of the Processor one. In this way the application is modular and easier to extend and maintain. Right now the only child of Processor will be the ProcessorFibonacci actor. I suppose you can guess what its task is. This should be enough to start.

To manage the cluster we need a ClusterManager. Sounds trivial, right? This actor handles everything related to the cluster, like returning its members when asked. It would be useful to log what happens inside the cluster, so we define a ClusterListener actor. This is a child of the ClusterManager, and subscribes to cluster events logging them.

The Node actor is the root of our hierarchy. It is the entry point of our system that communicates with the API. The Processor and the ClusterManager are its children, along with the ProcessorRouter actor. This is the load balancer of the system, distributing the load among Processors. We will configure it as a Cluster Aware Router, so every ProcessorRouter can send messages to Processor on every node.

Time to implement our actors! Fist we implement the actors related to the business logic of the system. We move then on the actors for the cluster management and the root actor (Node) in the end.

This actor executes the computation of the Fibonacci number. It receives a Compute message containing the number to compute and the reference of the actor to reply to. The reference is important, since there can be different requesting actors. Remember that we are working in a distributed environment!

Once the Compute message is received, the fibonacci function computes the result. We wrap it in a ProcessorResponse object to provide information on the node that executed the computation. This will be useful later to see the round-robin policy in action.

The result is then sent to the actor we should reply to. Easy-peasy.

We would like to log useful information about what happens in the cluster. This could help us to debug the system if we need to. This is the purpose of the ClusterListener actor. Before starting, it subscribes itself to the event messages of the cluster. The actor reacts to messages like MemberUp, UnreachableMember, or MemberRemoved, logging the corresponding event. When ClusterListener is stopped, it unsubscribe itself from the cluster events.

The actor responsible of the management of the cluster is ClusterManager. It creates the ClusterListener actor, and provides the list of cluster members upon request. It could be extended to add more functionalities, but right now this is enough.

The load-balancing among processors is handled by the ProcessorRouter. It is created by the Node actor, but this time all the required information are provided in the configuration of the system.

Let's analyse the relevant part in the application.conf file.

The first thing is to specify the path to the router actor, that is

/node/processorRouter. Inside that property we can configure the behaviour of the router:

Using this configuration we can create a router to load balance the work among our processors.

The root of our actor hierarchy is the Node. It creates the children actors - ClusterManager, Processor, and ProcessorRouter - and forwards the messages to the right one. Nothing complex here.

Every node of our cluster runs a server able to receive requests. The  Server creates our actor system and is configured through the application.conf file.

Akka HTTP powers the server itself and the REST API, exposing three simple endpoints. These endpoints are defined in the NodeRoutes trait.

The first one is /health, to check the health of a node. It responds with a 200 OK if the node is up and running

The /status/members endpoint responds with the current active members of the cluster.

The last (but not the least) is the /process/fibonacci/n endpoint, used to request the Fibonacci number of n.

It responds with a ProcessorResponse containing the result, along with the id of the node where the computation took place.

Once we have all our actors, we need to configure the system to run as a cluster! The application.conf file is where the magic takes place. I'm going to split it in pieces to present it better, but you can find the complete file here.

Here we are simply defining the ip and port of the nodes and the seed, as well as the cluster name. We set a default value, then we override it if a new one is specified. The configuration of the cluster is the following.

Akka Cluster is build on top of Akka Remoting, so we need to configure it properly. First of all, we specify that we are going to use Akka Cluster saying that provider = "cluster". Then we bind clustering.ip and clustering.port to the hostname and port of the netty web framework.

The auto-down-unreachable-after property sets a member as down after it is unreachable for a period of time. This should be used only during development, as explained in the official documentation.

Ok, the cluster is configured, we can move to the next step: Dockerization and deployment!

To create the Docker container of our node, we can use sbt-native-packager. Its installation is easy: add addSbtPlugin("com.typesafe.sbt" % "sbt-native-packager" % "1.3.15") to the plugin.sbt file in the project/ folder. This amazing tool has a plugin for the creation of Docker containers. it allows us to configure the properties of our Dockerfile in the build.sbt file.

Once we have setup the plugin, we can create the docker image running the command sbt docker:publishLocal. Run the command and taste the magic... :grin:

We have the Docker image of our node, now we need to deploy it and check everything works fine. The easiest way is to create a docker-compose file that will spawn a seed and a couple of other nodes.

I won't spend time going through it, since it is quite trivial.

Time to test our work! Once we run the docker-compose up command, we will have a cluster of three nodes up and running. The seed will respond to requests at port :8000, while node1 and node2 at port :8001 and :8002. Play a bit with the various endpoints. You will see that the requests for a Fibonacci number will be computed by a different node each time, following a round-robin policy. That's good, we are proud of our work and can get out for a beer to celebrate!!

Guys, we are done here! We learned a lot of things in these ten minutes:

You can find the complete application in my GitHub repo. Feel free to contribute or play with it as you like! ;)

See other articles by Luca